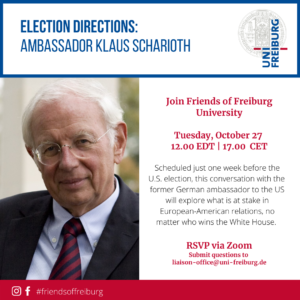 Scheduled just one week before Election Day in the United States, this conversation with former German Ambassador to the United States, Klaus Scharioth will explore what is at stake for German-American and European-American relations, no matter who wins the White House. Traditionally, the United States and Europe have cooperated in matters of enforcing global security, maintaining economic stability, and promoting democratic values, with the United States often leading the way. More recently, however, Europe has been forced to define its own path, as it breaks with the United States in responding to challenges such as climate change, the migration crisis, and the coronavirus pandemic. January 2021 will begin a new chapter in the transatlantic relationship, but which direction will it take?

Klaus Scharioth is professor of practice at The Fletcher School and dean of the Mercator College for International Affairs in Germany. He was a member of the German Foreign Service for more than 35 years (1976-2011). He served from 2006-2011 as German Ambassador to the U.S. and from 2002-2006 as state secretary of the German Foreign Office. Before that he was, inter alia, political director and director-general of the Political Department, director of the North America and Security Policy Directorate, head of the office of the German Foreign Minister, director of the private office of the NATO Secretary General, as well as vice Chairman of the U.N. Legal and Charter Committees. He also served in Ecuador, the International Law Division, and the Policy Planning Staff of the Foreign Office.

Ambassador Scharioth studied law at the University of Freiburg from 1969 to 1973.