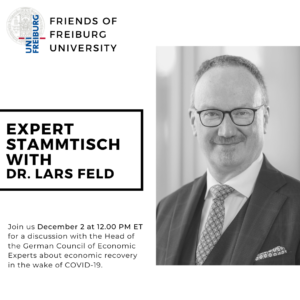 What are the prospects for economic recovery both in Germany and Europe, and in terms of the transatlantic partnership, as the coronavirus crisis continues? Although Europe’s largest economy shrank less than expected due to a strong summer, a second wave of infections in Germany brings new challenges. Head of the German Council of Economic Experts (Wirtschaftsweise) and Uni-Freiburg professor, Dr. Lars P. Feld, will speak about the council’s latest report, and what lies ahead on both sides of the Atlantic.

Prof. Dr. Dr. h.c. Lars P. Feld has been holding a chair of Economics, in particular Economic Policy, at Albert-Ludwigs-University of Freiburg since 2010 and is the current Director of the Walter Eucken Institute. After his studies in Economics at the University of Saarland (Germany) Lars P. Feld graduated from University of St. Gallen in 1999 and qualified for a professorship in 2002. From 2002 to 2006, he worked as a professor of economics, with a focus on public economics, at Philipps-University Marburg, and from 2006 to 2010 at Ruprecht-Karls-University Heidelberg. He is a member of Leopoldina (the German National Academy of Sciences), the Kronberger Kreis– scientific council of the think tank Stiftung Marktwirtschaft –, and the Mont Pelerin Society. From 2007 to 2009, he was president of the European Public Choice Society. Since 2003, Lars P. Feld has been a member of the Scientific Advisory Council to the Federal Ministry of Finance and, since 2011, a member of the German Council of Economic Experts (GCEE), and since March 2020 the chairman of the GCEE. He currently represents the GCEE in the Independent Advisory Council of the Stability Council, Germany’s construction of a fiscal council. Since 2020, he is a member of the German minimum wage commission. In 2017, he received an honorary doctorate from the University of Lucerne in Switzerland.