Heidegger in Ruins: Between Philosophy and Ideology 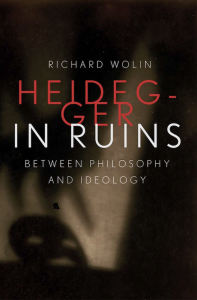 A Dialogue Between Richard Wolin, Distinguished Professor of Comparative Literature, History, & Political Science at the CUNY Graduate Center, and Martin Jay, Sidney Hellman Ehrman Professor of History, Emeritus, at the University of California, Berkeley. This dialogue follows the release of Dr. Wolin’s new book, Heidegger in Ruins: Between Philosophy and Ideology from Yale University.

Martin Heidegger’s sympathies for the conservative revolution and National Socialism have long been well known. As the rector of the University of Freiburg in the early 1930s, he worked hard to reshape the university in accordance with National Socialist policies. He also engaged in an all-out struggle to become the movement’s philosophical preceptor, “to lead the leader.” Yet for years, Heidegger’s defenders have tried to separate his political beliefs from his philosophical doctrines. They argued, in effect, that he was good at philosophy but bad at politics. But with the 2014 publication of Heidegger’s Black Notebooks, it has become clear that he embraced a far more radical vision of the conservative revolution than previously suspected. His dissatisfaction with National Socialism, it turns out, was mainly that it did not go far enough. The notebooks show that far from being separated from Nazism, Heidegger’s philosophy was suffused with it. In this book Richard Wolin explores what the notebooks mean for our understanding of arguably the most important philosopher of the twentieth century, and of his ideas—and why his legacy remains radically compromised.

Hosted by Manfred Philipp, Professor emeritus and Uni-Freiburg alumnus, on behalf of the CUNY Academy for the Humanities and Sciences, the Comparative Literature Program at the CUNY Graduate Center, the Friends of the University of Freiburg, and the US Alumni Association for the German Academic Exchange Service, DAAD.