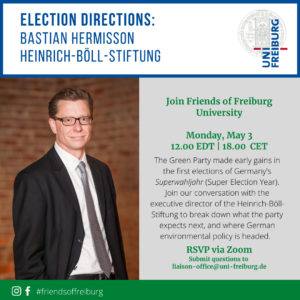 The first German elections of 2021 showed promising results for the Green Party, especially in Freiburg’s home state of Baden-Württemberg. Will this translate into further success for the party during Germany’s “super election year”? Join our discussion with Uni-Freiburg alumnus and executive director of the Heinrich-Böll-Stiftung, Bastian Hermisson, for a discussion about the Green Party’s electoral prospects and the implications for German politics in the post-Merkel era. We will also compare American and German climate and infrastructure policies.