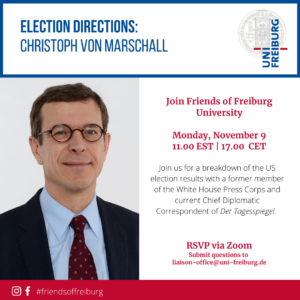 With more Americans voting by mail than ever before, it will likely take days (or even weeks) for the official results of the US election to be finalized. We’ll breakdown the available data — and discuss the implications for the US and beyond — with Dr. Christoph von Marschall, an Uni-Freiburg alumnus and one of the most prolific reporters on the transatlantic relationship. Join this webinar as we examine what’s next for Washington from the perspective of Berlin, in the second event of our „Election Directions“ mini series.

2017/18 he was the inaugural Helmut Schmidt Fellow of the Zeit Foundation and the German Marshall Fund of the US, based in Washington DC with access to the White House. He wrote a book about the future of Transatlantic relations focusing on the expectations of France, Poland, the EU and the US towards Germany’s role:

From 2005 to 2013 he served as US Correspondent and Washington Bureau Chief. During the Obama presidency he was a member of the White House Press Corps. He wrote biographies of Barack and Michelle Obama and a book on differences in political culture between the US and Germany.

Born October 8, 1959 in Freiburg, he studied East European History and Political Science in Freiburg, Mainz and Cracow (Poland), concluding with a PhD on Polish history in 1988 at Freiburg University.  In 1989/90 he covered for “Süddeutsche Zeitung” the peaceful regime changes in Central Eastern Europe. Since 1991 he works for „Der Tagesspiegel“, Berlin, first in the newsroom and 1995 to 2005 as Editorial Page Editor.