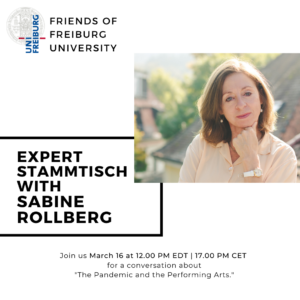 Please join our next virtual Stammtisch on „The Pandemic and the Performing Arts.” We are delighted to host Sabine Rollberg, a professor and expert in the German film and television industry, and a member of the University of Freiburg advisory board, for this timely discussion. In conversation with moderator Sarah Stephens of Stephens Nicolson Artists Management, Rollberg will speak about funding for the arts in Germany and the European Union, and prospects for their post-pandemic recovery. She will also address new initiatives coming out of the pandemic, in particular from Freiburg.

Sabine Rollberg is a German Professor of Artistic Television Formats, Film and Television, as well a former commissioner and head of the editorial department of Arte at the Westdeutscher Rundfunk (WDR). She studied German, History, and Politics at the University of Freiburg from 1973-1974 and 1976-1980. She developed and oversaw an array of diverse TV programs and has also become internationally known as a dedicated editor and promoter of documentary film. From September 2008 to April 2019 she taught at the Academy of Media Arts Cologne (Kunsthochschule für Medien Köln). In 2014, the Grimme Award laureate was appointed to the advisory board of the University of Freiburg and the University College Freiburg.