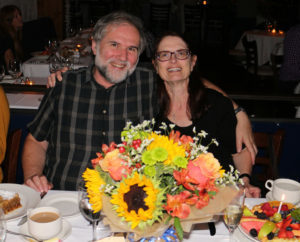 Alumni Freiburg North America wishes its Alumni a Happy Valentine’s Day! To celebrate, we thought it would be fitting to portrait two of our North American alumni couples who met during their studies in Freiburg. Each couple answered a few questions, including who should play them if Hollywood were to ever make their story into a movie. 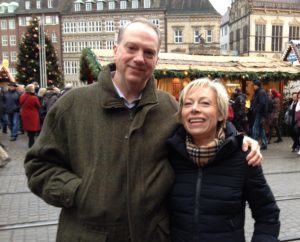 1) How did you meet? – We happened to arrive separately, but at the same time, at a party for new students. When we entered the door together, everyone assumed we were together already and no one spoke to us. We soon left together.

2) What was your first date in Freiburg? – We left the student party and had a Viertele at the Grosser Meyerhof.

3) Did you have a favorite spot in Freiburg? – Der Kuehle Krug in Guensterstal.

4) If they were to make a movie about you, which actor would play each of you? – Helen Mirren and Bryan Cranston. 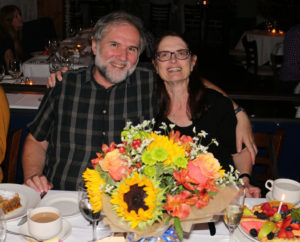 1) How did you meet? – We first met at the “Chemisches Laboratorium” in the winter semester 73/74. In the second semester the “Analytik” lab was the moment where we came closer. At that time, we made friends with several classmates. Some of the friendships last until this day.

2) What was your first date in Freiburg? – After 3 semesters we had to pass several oral exams. One of them was in physics. Ingrid was looking for a tutor with good knowledge of the subject. That was me. Soon physics came only second but was a good reason for regular dating.

3) Did you have a favorite spot in Freiburg? – We both enjoyed hiking and whenever we could we hiked from the Campus to the Schlossberg above the city where you had a nice view of the city and the black forest. On clear days you could also see the “Kaiserstuhl” and the Vosges mountains. One place we loved there was the Schlossberg Restaurant. This place is also linked to two memorable occasions: our wedding and Ingrid’s 60th birthday party.

4) If they were to make a movie about you, which actor would play each of you? – This is a difficult question. After some discussion we ended up with the following: Manfred would like to be played by Dustin Hoffman and Ingrid by Barbara Streisand.