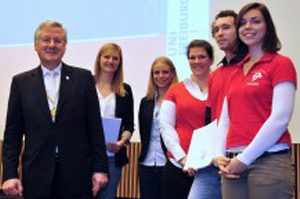 This year the booster association Alumni Freiburg e.V. awarded the “Alumni Prize for Social Involvement” for the second time. This year’s prize was presented to “Initiative Schlüsselmensch” and the project “Mit Sicherheit verliebt” at the official opening of the academic year on 23 October.
In a speech commemorating the prizewinners at the official opening of the academic year, Professor Schiewer expressed his great pleasure at the large number of students who had been nominated for the prize for all kinds of involvement at and outside of the university and said that the decision had therefore been difficult to make.

This year’s first prize went to “Initiative Schlüsselmensch” (roughly, the “key person initiative”). The student members of “Initiative Schlüsselmensch” support refugees by finding sponsors for children from the St. Christoph refugee home in Freiburg. An important part of their work is helping the children with homework assignments, with special emphasis on the German language. In addition, the sponsors regularly organize activities for the children, including outings in the city and the surrounding countryside, trips to the movie theater, and soccer practice.
The 500-euro second “Alumni Prize for Social Involvement” was awarded to the project “Mit Sicherheit verliebt” (a play on words meaning both “definitely in love” and “safely in love”), organized by the student committee at the Faculty of Medicine. The students offer sex education lessons to school students at all types of schools. Twenty students visited sixth to ninth grade classes at 13 Freiburg schools last summer semester. The students have now succeeded in establishing a long-term and broad collaboration with the Staudinger Gesamtschule in which they will give lessons to all of the school’s eighth grade classes each year.