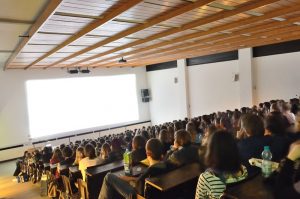 Since 1957, the aka Filmclub at the University of Freiburg has been presenting a comprehensive and varied program of individual films and series of themes, from classics and blockbusters to niches and debut works.

Students from all faculties volunteer for the association, which also organizes a Super 8 Festival every year. For its 60th anniversary in 2017, Alumni Freiburg e.V. is promoting the production of a DVD with in-house productions from its foundation until today.